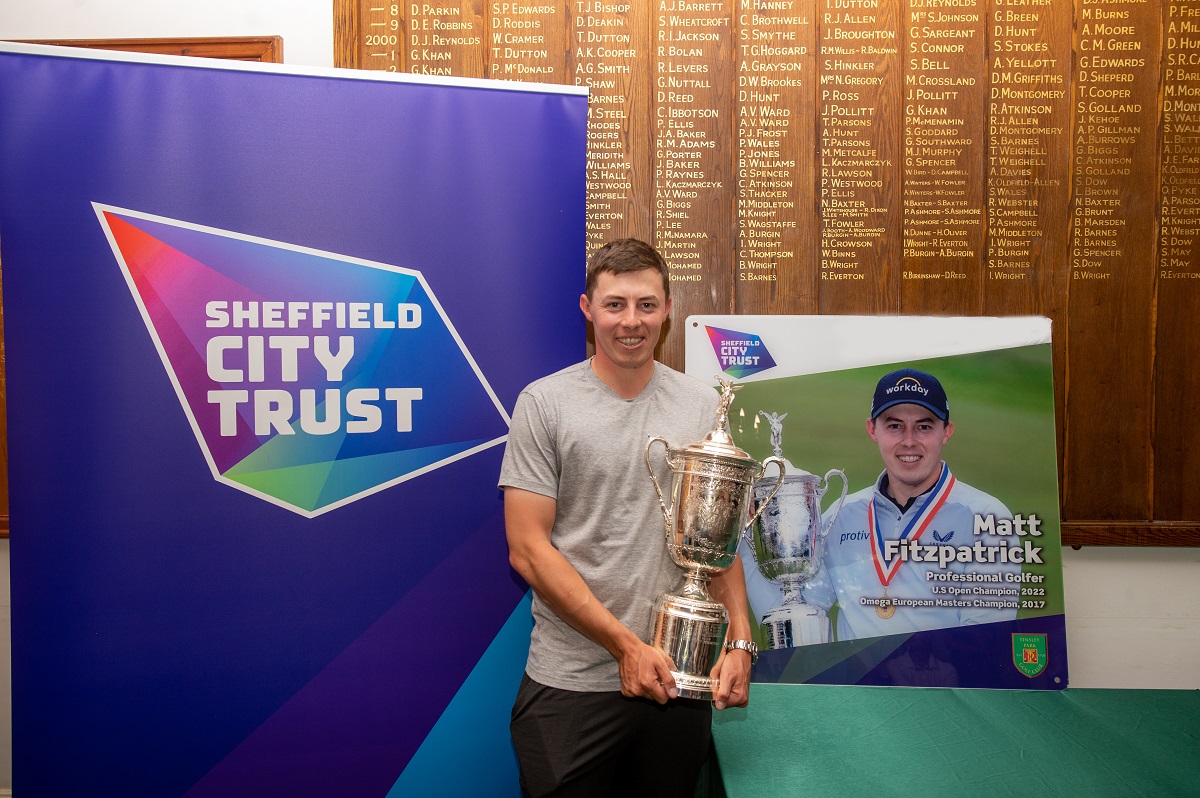 US Open winner Matt Fitzpatrick was back in his hometown of Sheffield this week presenting golfing trophies at one of his favourite local courses, Tinsley Park Golf Club.

The twenty-seven-year-old who has just returned from the 150th Open at St. Andrews sponsors The Banning Cup and Ledger Trophy which is played annually for Sheffield Union of Golf Club’s members at Tinsley Park where memberships are at an all-time high.

Matt, who is from High Green, played at Tinsley Park as a young boy as it was where his dad began his own golfing journey and introduced Matt to the sport. Matt is an honorary member today along with his dad Russ and 23-year-old brother Alex who also turned professional this June. Matt and Alex have played in the Banning Cup and Ledger Trophy a number of times and Matt was the winner of the Ledger Trophy in 2009 as a 14-year-old, registering his first major club competition win.

On presenting the awards today Matt said: “Thanks to everyone for coming and I’m more than happy to support these trophies.

“I was talking to my dad last week about Tinsley and he said he used to pitch up at 4 in the morning to play and without my dad coming to play at Tinsley I’d probably never have got into the game, and I might never have been doing what I do, and this is really where it all started and I’ve got a lot to be thankful for to be here.”

Tom Booth, our General Manger for Golf said: “It was fantastic to see Matt back at Tinsley Park presenting The Banning Cup and Ledger Trophy, everyone was thrilled to see him and congratulate him on his recent title at the US Open.

“Our golf memberships are at an all-time high across all our golf clubs with over 2300 members, the highest we have ever seen. It was therefore very fitting that Matt visited during this peak in memberships as he is an inspiration to our young audience who aspire to follow in his footsteps.”

Matt presented the Banning Cup to winner 17 year-old Brandon Swords from Phoenix Golf Club, Rotherham but unfortunately the Ledger Trophy winner Steven Bridges from Hickleton Golf Club, Doncaster was unable to attend. An additional presentation was made for 2021 as this celebrated the centenary event of the competition, of which Lewis Harrison of Birley Wood Golf Club won both the Banning Cup and Ledger Trophy.

Brandon Swords said: “Someone at the club had mentioned that Matt might present the trophy for the competition but then he won the US Open and I thought it might not happen but that if it did it would be even better.

“My dad then got the phone call to say it was going to happen and I was over the moon, it could not have been any better! “

Matt has also professed on Twitter in 2019 when asked by a member of Tinsley Park if he fancied coming to play a round, ‘Quality Golf Course! Love Tinsley, where my dad started playing.’

All our golf memberships include complimentary swimming and gym access at any Sheffield City Trust venue. For more information click the button below: